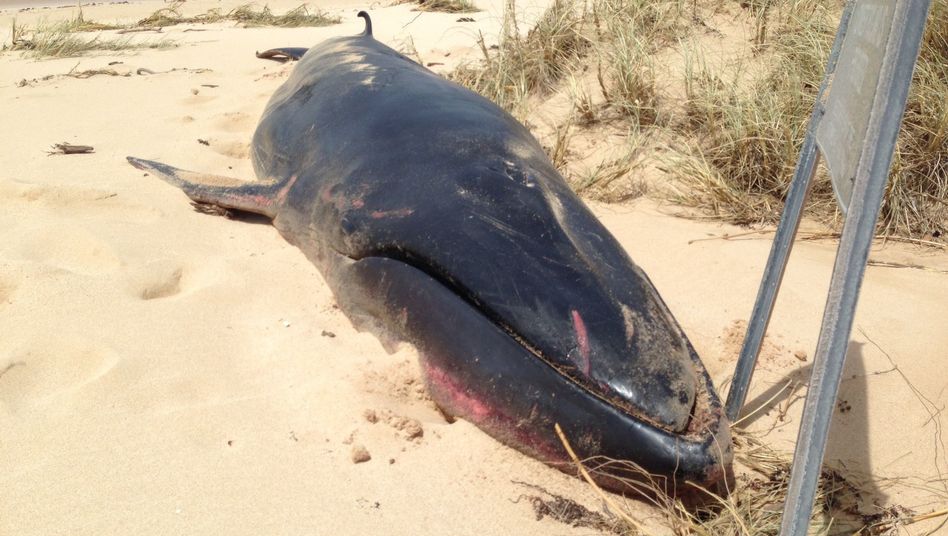 Researchers off the coast of Madagascar have filmed the elusive species.
Number of Omura’s whale unknown and it was feared that they were extinct.

The elusive Omura’s whale has been recorded on film for the first time.
Footage of the rare and little-known species was captured by an international team of biologists off the coast of Madagascar.
Up until now, there had never been a confirmed sighting of the mammal in the wild by scientists and as such their numbers are unknown.

Salvatore Cerchio, who led the research while at the Wildlife Conservation Society and is a guest investigator at the Woods Hole Oceanographic Institution (WHOI) said in a news release:
‘Over the years, there have been a small handful of possible sightings of Omura’s whales, but nothing that was confirmed.
‘They appear to occur in remote regions and are difficult to find at sea, because they are small-they range in length from approximately 33 to 38 feet-and do not put up a prominent blow.’

‘What little we knew about these whales previously came primarily from eight specimens of Omura’s whales taken in Japanese “scientific whaling” off the Solomon and Keeling Islands and a couple strandings of dead animals in Japan,’ Cerchio said.
‘This is the first definitive evidence and detailed descriptions of Omura’s whales in the wild and part of what makes this work particularly exciting.’
In a paper published this week in the Royal Society Open Science, the researchers described the whales ‘foraging and vocal behaviours, and habitat preferences in the shallow waters of coastal Madagascar.’

Being substantially smaller than many other blue whale species, the Omura’s whale had historically been misidentified as Bryde’s whales.
However, the animal has a unique asymmetrical pigmentation on their head.
‘When we clearly saw that the right jaw was white, and the left jaw was black, we knew that we were on to something very special,’ added Cerchio.
‘The only problem was that Omura’s whales were not supposed to be in this part of the Indian Ocean. Rather, they should be in the West Pacific, near Thailand and the Philippines.’

A SPECIES SO RARE IT WAS FEARED EXTINCT
In April 2015, MailOnline reported that a species of whale that was feared to be extinct has been found washed up on a West Australian beach, giving scientists an opportunity to learn more about the mammal.
The Omura’s whale was discovered on a remote Exmouth beach, at the tip of the state’s North West Cape, after Tropical Cyclone Olwyn tore through the area.
It is the first sighting of the species in WA and only the second in Australia.
Identifying the 5.68m juvenile female was at first difficult for Department of Parks and Wildlife staff, who eventually confirmed it was an Omura’s whale with DNA profiling.

An Omura’s whale was discovered on a remote Exmouth beach in WA (pictured). It left authorities confused as they struggled to identify the rare species
Environment Minister Albert Jacob said the find was ‘highly significant’ for whale scientists because very little was known about the species.
‘Omura’s whale was only described in scientific journals for the first time in 2003 and is apparently restricted to tropical and subtropical waters,’ he said.
The knowledge we gain from this whale will help to improve field identification guides to better understand the whale’s regional distribution.’
The species is usually found in Indonesian waters, the Philippines and the Sea of Japan.
Omura’s whales have a sleek body shape and several unique skeletal features, including 53 vertebrae and four digits on each pectoral fin.
The carcass has been buried and the skeleton will be recovered in a few years for further scientific investigation and possibly for public display in museums. 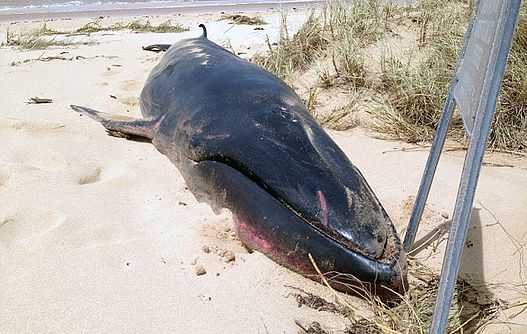