April to September is the Norwegian whaling season and the reports in 2015 confirmed that 660 Minke whales had been slaughtered. Due to bad weather conditions, “only” 660 were slaughtered compared to 736 the year before.

Norway resumed commercial whaling in 1993 and has since killed over 9,500 whales even through Norwegians now consume less whale meat than in the past.

Norway is trying to create a bigger market for its whale meat by selling it to Japan and other countries. However, some of that meat was dumped by Japanese officials after routine tests revealed that it contained up to twice the allowed level of potentially dangerous pesticides. Tests from the Japan Ministry of Health, Labour and Welfare show that whale meat from Norway contains high levels of harmful pesticides, including aldrin, diedrin and chlordane. This violates human health standards and can cause birth defects, neurological harm, and some cancers if humans consume them in high quantities. This is not the first time Norwegian whale meat is in the spotlight for health concerns. In 2009 it was rejected from Japan because the level of live bacteria was too high.

Norway has, for the last 2 decades, benefited from the support of the Norwegian government and corporate investment to research and develop whale oil for pharmaceutical and health supplement applications and for animal feed. Millions of Norwegian kroner have been spent on developing new ways of using Minke whales. (source: www.nifes.co) 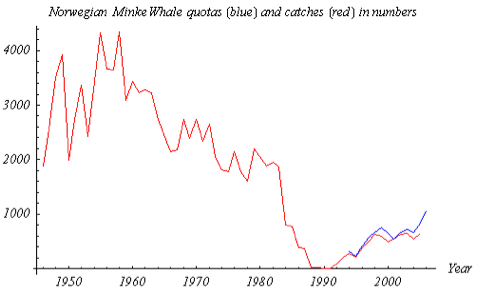 The hunting of Minke whales was reduced from the 1960’s to the 1990’s as the Minke whales were considered too small in size to hunt. But since 1990, Minke whale hunting has been accelerating again since other bigger whale species are over hunted. Minke whales usually live for 30–50 years; in some cases they may live for up to 60 years.

Minke whales are the world’s most hunted whale species with Norway killing over 600 a year and Japan over 500 a year for “scientific research”. Quotas are even higher! (1286 for 2015 in Norway)

Since 1960, the decline in whale populations around the world prompted an international moratorium on commercial whaling that came into effect in 1986.  Under the moratorium, whaling is legal only under a scientific research permit or with an aboriginal subsistence whaling permit.  Despite the moratorium, nearly 40,000 whales have been slaughtered in the past 27 years. AWI (Animal Welfare Institute) and EIA (Environmental Investigation Agency) have called on the Norwegian Government to stop supporting whale hunting and accept the international ban on commercial whaling and trade in whale products.

Norwegian whalers kill the whales with harpoons, a technology which has not changed much in the last 100 years. Due to visibility, sea swells and the movements of the boat makes it nearly impossible to ensure a shot accurate enough to kill the whale immediately.

The Norwegian government’s own official data shows that at least one in five whales do not die straight away and therefore suffer long and agonising deaths!

TAF visited Norway in 2019 –  Please find below our two reports