The dolphin drive hunt is an annual dolphin hunt that takes place in Taiji, Japan.

It starts on September 1st and lasts for six months until the end of March.

The capture of dolphins in the small fishing village of Taiji is carried out by about 26 fishermen. They kill the dolphins with permits from their government.

The majority of people in Japan are unaware of this annual government-sanctioned dolphin slaughter.

The number of dolphins killed in the dolphin drive hunt, also known as “drive fishery” varies from year to year, with an average of 1,200 to 1,800. 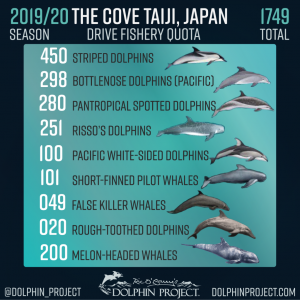 The fishermen of Taiji have developed a highly effective method of locating, capturing, and eradicating dolphins – sometimes more than one hundred in a single day.

Before sunrise, about 26 fishermen board their motorized banger boats and head out to deep water where the dolphins migrate. The dolphins have been using these migratory paths for thousands of years, and the hunters know exactly where to find them.

When a school of dolphins swims by, the fishermen position their boats one behind the other, perfectly evenly spaced. Then they lower several stainless steel poles into the water, one on each side of each boat. The poles are flared out at the bottom, much like a bell, which amplifies the sound produced when the hunters repeatedly hit the poles with hammers. The noise creates a wall of sound underwater, and the dolphins suddenly find themselves trapped between this wall of sound and the shoreline.

Trying to get away from the sound, the dolphins swim in the opposite direction, toward the shore. The dolphins’ panic and loss of navigational sense enable the fishermen to drive them into a small, hidden Cove near Taiji harbor. The fishermen seal the mouth of the Cove with several nets, and the dolphins are trapped.

How do they kill the dolphins?

The Taiji Dolphin Killers herd the trapped dolphins into shallow water, close to the rocky beach. Here, they kill the dolphins with long, sharp spears. Often, they stab the dolphins with sharp fishing hooks and haul the still living dolphins onto their boats. The cruelty is enormous. The dolphins thrash about in their blood, and the air is filled with their screams. This killing, called “humane” by government bureaucrats, has been documented in 2009 by the Academy Award-winning documentary, The Cove.

Since The Cove came out, the fishermen have altered their killing methods. The fishermen pull dolphins underneath an array of plastic tarps (set up to prevent them from filming the slaughter). There, the killers push a sharp metal spike into the dolphins’ necks just behind the blowholes, which is supposed to sever the spinal cord and produce an instant “humane” death. The fishermen even push wooden corks into the wounds to stop spilling blood into the Cove, again to prevent the filming of blood-red waters.

Why do they kill the dolphins?

Officially, the main purpose of the dolphin hunt is to provide dolphin meat to the Japanese people. But only a small minority of people in Japan actually eats the meat. DNA tests on meat labeled “whale meat” in Japanese markets have revealed the meat is in fact falsely labeled dolphin meat. Whale meat sells for more money than dolphin meat, so Japanese consumers are tricked into buying dolphin meat falsely labeled as “whale” meat. Over-fishing of the oceans is a tremendous problem on a global level, and the Japanese fishermen, supported by their government, are wrongly pointing at the dolphins as the reason for this depletion. The desire to keep the dolphin population down is a major reason why the Japanese government is so keen on issuing permits for the hunts. It is not really about providing meat for the Japanese people. It is not really about maintaining what the fishermen repeatedly refer to as their “tradition” or “culture.” It is about eradicating as many dolphins as possible in order to make the oceans’ fish available to them!

Why do members of the Dolphinarium industry take advantage of the hunt?

One of the most shocking aspects of the dolphin drive hunt is the active role that dolphinariums play in sustaining the hunt. Dolphinariums are always looking for ways to obtain more dolphins. Many times, the fishermen of Taiji will drive a large school of dolphins into the killing cove, and dolphin trainers and marine mammal veterinarians flock to the scene to seek out the best-looking dolphins for their facilities.
By doing business with the dolphin killers, they are helping to maintain the dolphin drive hunts. A live dolphin sold to a dolphinarium brings in a much higher profit than a dead dolphin does, sold for meat. The average dead dolphin for meat ranges about $600. Live Bottlenose dolphins have been sold for as much as $300,000 each.

As long as marine parks continue to exploit dolphins for captivity the drive hunts in Taiji will continue.

Read about TAF's trip to Japan
General Information about Japan
×
×