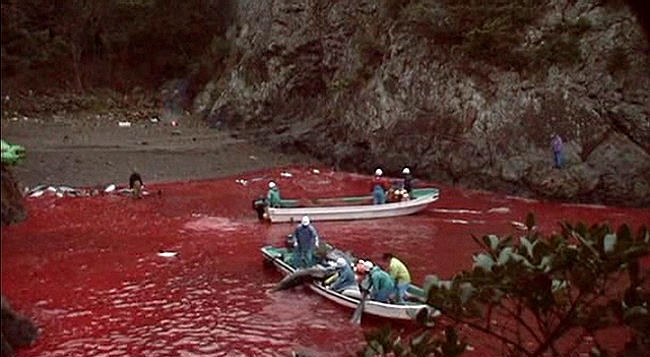 Taiji’s annual 6 month season to conduct the mass slaughter of dolphins has been underway since mid September, with the first victims being a pod of 12 Risso dolphins slaughtered on 11 September 2015. Whilst bad weather hampered the start of the season, there is now a concerted focus to increase the killings.
The biggest catch of the Taiji hunt so far was on 19 September, when a pod of 80 bottle nosed dolphins were herded into the cove. 30 were released and 50 slaughtered.
There are orders with the local purchase agents this year for 140 live dolphins to be captured as part of the hunt, compared to 70 in 2014. The best looking of the captured dolphins escape slaughter but are then sold on by the local buyers to aquariums and dolphin shows.
As at 4 November, the statistics show that 232 dolphins have been herded into the cove at Taiji, of which 144 have been slaughtered, 36 released and 52 taken as live capture.

So how does this compare with the legally allowed quotas?  The Japanese press announced on 31 August 2015 the annual quotas set by the Japanese Fisheries Union for the massacre of dolphins in Taiji – 1,873 animals in total from seven species

With the current total of slaughters standing at 144, and 52 sold to local buyers for aquariums, compared to the quota of 1873, it is clear that the Taiji fishermen will continue their killing for the next few months……..